The Bodhran is a drum, consisting of a shallow circular frame with a goatskin tacked around the side. The skin is often buried in cow manure in order to cure it for this purpose. It is played in an upright position with a stick in a manner, which differentiates it from other ethnic drums.

However, before 1950, it was a combination agricultural utensil and musical instrument confined to male performers during the wren-hunting ritual of St. Stephens Day (December 26th). With the advent of the Fleadh Ceoil, the bodhran began to break its ties and participate informally with other instruments in music sessions. When Irish Composer, Sean O’Riada, included a bodhran in his ensemble Ceoltoiri Chualann, it seemed as if the instrument had completed its journey from a rural to urban environment, and from a ritual function to the concert hall.

There are traditionally various styles of using hand and stick throughout the country, although nowadays playing with the hand alone is rare and bodhran style is characterized by the percussive sound at the top of the stick, creating the rolls while the bottom leads the rhythm. But the main innovations, which lead to how we hear the bodhran, being played today, took place during the 1970’s in the hands of two players, Johnny “Ringo” McDonagh of the group De Dannan and Tommy Hayes of Stocktons Wing.

Their exploration and mastery of technique and style of the instrument was to widen its parameters and popularize it to the extent we see today, while setting a standard of playing which has seldom been equalled. The main developments, for which they are responsible, include the use of the left hand to apply pressure to the skin, thereby altering timbre and pitch; use of the brush stick usually associated with jazz drumming; occasional rim – shots to accent rhythms and, perhaps mostly; the playing of rhythms independent of the tune including counter rhythm and syncopation. Bodhrans are still being made today using age-old traditions; one such craftsman is Malachy Kearns of Roundstone, Connemara, Co. Galway. He believes quality goatskin is vital to the unique haunting tone and says “making bodhrans is very close to nature and when played is very freeing for the soul, and the whole evolvement has a spiritual experience to it. Malachy made the drums for “Riverdance”. 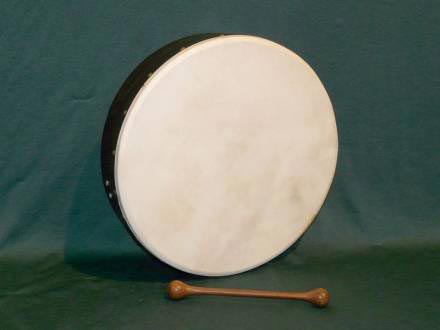