The Irish Uilleann Pipe is probably the most elaborate bagpipe in the world. It was developed from roughly the 1700’s to the present time in Ireland, with contributions from the U.S. and European countries.

Today it is widely known as the “uilleann” pipe from the Irish word for “elbow” but it has earlier been called variously the “union” pipe and the “organ” pipe. Unlike many types of bagpipe, the Uilleann pipes are not blown by mouth but are inflated by a bellows. Perhaps the most important feature of the instrument is its melody-pipe or chanter, which plays more than 2 complete chromatic octaves (most forms of bagpipe can play little more than one octave). The chanter is essentially a primitive oboe and is very quiet, about as loud as 1-2 fiddles.

Like the Scots Highland bagpipe, the Uilleann pipes have 3 drones but they are very quiet. One of the most unusual features of the instrument is the set of (typically) 3 more oboes in the form of 1-octave, 4- or 5-note stopped harmony pipes with keys operated by the wrist (while the piper fingers the melody on the chanter) to provide several simple chords for accompaniment.

These pipes have the peculiar name of “regulators” although they are purely musical and do not in any way “regulate” air pressure or behavior of the instrument. The most commonly-heard or “concert pitch” pipes are tuned in the key of D. The drones are all tuned to D and the chanter plays 2 chromatic octaves (or more) starting with a D. Anciently, the pipes were set to lower pitches, and a small number of instruments are regularly heard in keys of C#, B and B-flat. These are generally quieter and are most often played solo since it is somewhat difficult for other common Irish instruments to tune to them. The instrument must be played seated with one leg lowered. The chanter bottom is placed onto this leg to seal the opening shut, so that the piper can play either continuously or, as desired, can stop the chanter to play interrupted or stacatto notes. 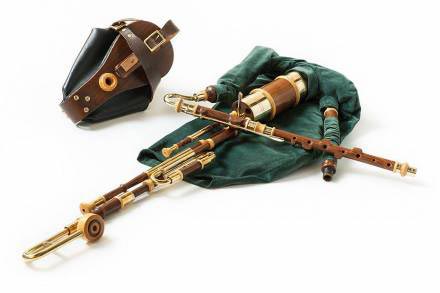