a.k.a. Booster, a.k.a. Boo
Weapon of Choice; Guitar and Vocals

One of the ‘Old Guard’ of Crawlers, Boo cut his musical teeth while occasionally patronizing school, and became interested in Traditional Irish music while attending on international pop superstardom. A gifted songwriter, he has recorded several albums and Eps with his band Caliban, with whom both he and fellow Crawler Larry Shaw have toured the planet extensively.

Noted for his passionate performance technique, Boo is a born entertainer, his likes include long walks, fine cuisine, the translation of 18th century Russian poetry, go-karting to formula one standard, Duran Duran, romantic evenings by the fire, and the possibility of a $20m 5 album deal from Time Warner, truly a man for all seasons!

For Paternity Suits Contact booster@ecaliban.com or if it’s only informationyou’re after try. 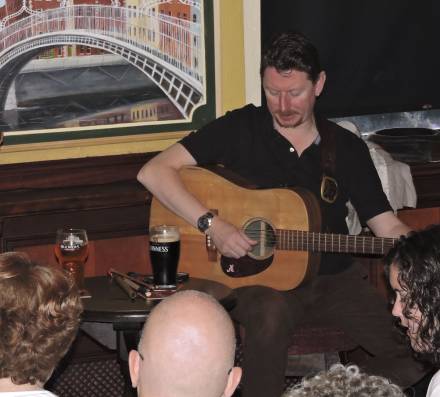