a.k.a. Bren, a.k.a. O’Suilleabhan, a.k.a. Breny
Instrument of Destruction; Fiddle (c.f. proper nomenclature for ‘violin’).

Perfecting his craft over a fifth of a century, Brendan meandered away from the early influence of traditional fiddle playing and experimented with the genres of classical, rock and jazz involving himself with groups the likes of the (rather aptly titled) Reckless Pedestrians, and Jack L.

After an 18 month tour of the globe, however, Brendan returned his roots, forming a traditional tour de force with two other exponents of the crawlers craft Alan Doherty(flute, see no.6) and Gerry Paul(guitar, see no.17), collectively known as Grada(and many, many other things besides).

Brendan has a library of information concerning the history of the tunes he has mastered and tiptoes between the different traditional fiddle styles deftly and effortlessly. Fond of a social drink, Brendan is the man to see if you want to have any hope of getting a late pint in the Halfpennybridge Inn, and he cites as his influences Kevin Burke, nurses, Martin Hayes, Guinness and miraculous lacks of concussion. 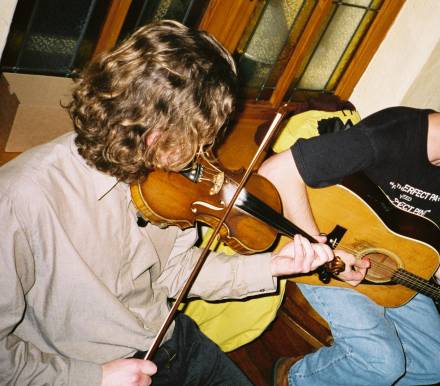