One of the leading lights of the city’s traditional folk contingent, Des has a veritable library of songs which he consistently augments and develops.

Recently he has begun studies in the Irish language in order to better understand the nuances of the ancient song tradition but has still found time to perform with bands such as DeJimbe, and to have been an integral part of the highly successful Millenium Drum Festival.

He has played support to renowned songwriter Patsy O’Brien and is currently busy working on his own debut CD. Des resides in the city but likes nothing more than to leave the smog behind and climb any mountain which happens to cross his path, he loves animals (cats in particular), and would like to be an astronaut when he grows up. 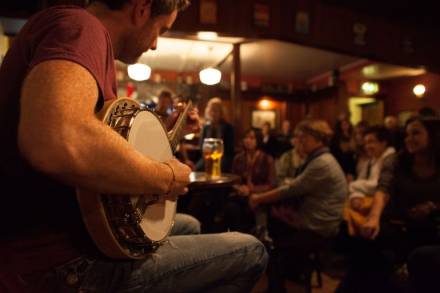