a.k.a. Eoin The Piper, a.k.a. Eoin An Piobaire
Favourite Belt; Uilleann Pipes.

Eoin is a central figure in the definition-scrambling collective known as Kila, who continue to drag traditional Irish music kicking and screaming into the 21st century.

His mastery on the uilleann pipes, one of the tradition’s most difficult indigenous instruments, is recognised wherever in the world he happens to be, and his laid back well-informed narratives form the backbone of many an evenings’ entertainment on the crawl. A cunning linguist, Eoin has picked up snatches of local terminology from many of the far-flung countries he has visited and he is also a fluent speaker of the Irish language. He likes chips, the films of Eastern Europe, and occasionally wondering what it would be like to be a woman. 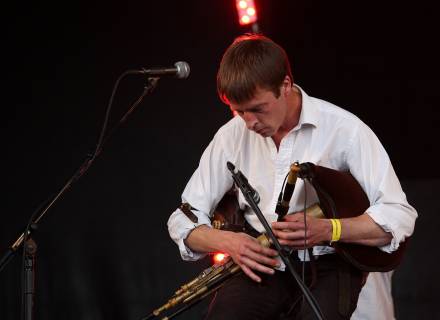