a.k.a. Sauce, a.k.a. Lar, a.k.a. The Outlaw
Defence Against Poverty; Fiddle

Hailing from the windswept savannahs of North Louth, Larry found himself weaned on the tradition by his musical parentage, influences still apparent in his unique style today.

Another ‘Old Guardsman’, Larry has enjoyed lengthy musical alliances with many of the other crawlers, including a successful recording and touring schedule with A.Bools in the guise of Caliban (see no. 1 above) and he is a regular on the Temple bar session circuit.

His influences vary from Sid Vicious to God, and pretty much everything in between, but his eclectic tastes are matched by an unrivalled passion and respect for the musical tradition of which he is a part. He resides in Co.Wicklow with his girlie and their two dogs, his talents ensuring ample time for his alternative existence as a country gentleman of leisure. 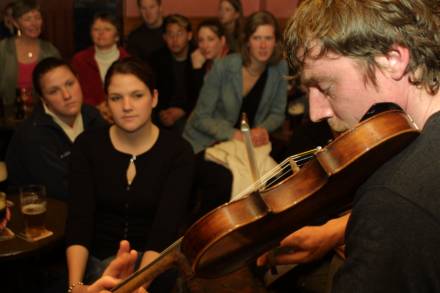