a.k.a. Marky Mark, a.k.a. Frenchie
Licenced To Thrill With; Guitar, Vocals, Bodhran.

Mark is the Prime Mover of the pub crawl, the Grand Negus, El Presidente and the Commander In Chief of the Old Guard. The first musician to play on the crawl, Mark’s considerable musical history includes liasons with Emer Mayock(flute), with Larry Shaw(fiddle, see no.4) and with notable group Kila. A passionate festival fanatic, Mark has plied his craft at international venues, but calls Dublin his home and is a consistently familiar face at traditional music happenings in the capital.

Ever on the go, Mark has been voted as ‘man most likely to succeed Paddy Maloney in the hierarchy of traditional music’ and his inexhaustible energy makes an irreplaceable contribution to the direction in which Irish music is heading. Some of Mark’s favourite hangouts include the Palace Bar, the Chancery Inn and anywhere S Club 7 are playing live. He is currently developing a t.v. series called Tradstars which will chart the tears and the triumphs of thousands of youngsters as they audition to be part of the next Chieftains album. 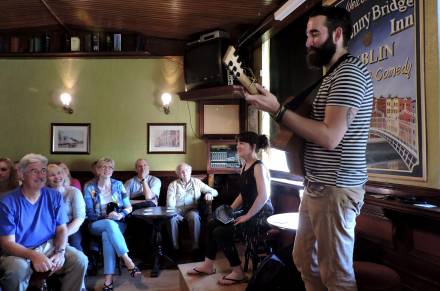