A central figure at Dublin sessions for over a decade, Mick has graced the boards with such leading performers as Gerry O’Connor(banjo), Peter Browne(button accordion) and Anthony Ward (banjo/mandolin). He loves to play the U.S. circuit and is constantly in demand in Asia where he has built up a considerable following after several visits.

A consummate showman, Mick’s exceptionally powerful vocals often leave his audiences enthralled and he is currently polishing up a selection of his own songs for his debut solo album. Family man Mick has abandoned the glare and noise of city life for the quiet and solitude of sun-soaked south Cavan, where he indulges in his hobbies of fly-fishing, alcohol-testing, family-loving, and learning to deal without 24-hour convenience stores. 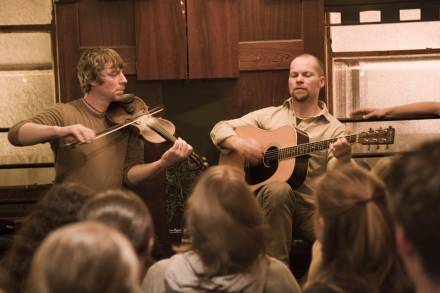