a.k.a. Tinkerbell
Object She Would Most Like To Colour Pink; Fiddle.

Definitely a favourite of crawl audiences, Trish was another early starter on the road to traditional superstardom. Having sessioned her way around the country, she formed the seminal traditional outfit Lia Luachra with famed guitarist John Hicks, renowned bazoukiist Declan Corey and Shane Bracken on the concertina.

This band toured extensively and released two exceptionally successful albums before separate professional commitments forced the group to disband. Trish then became part of the Lord Of The Dance spectacular, touring widely, but she still finds time to wow crawlees(see dictionary) with her fiery brand of fiddle playing whenever she’s in town. Trish is a firm believer in the theory that the world would be a better place if everything was pink and has incurable addictions to cuddles, late nights and shopping. 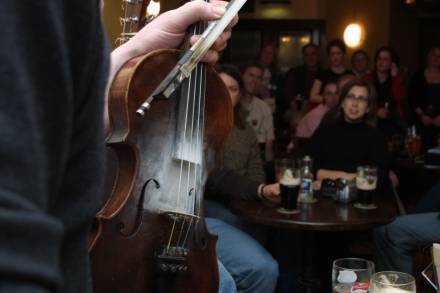